Below are some of the key dates for the 2020-2021 school year.
Please know that the format of some of the events listed below are TBD at this time.
*Indicates Updated information. 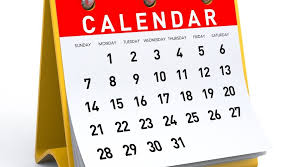